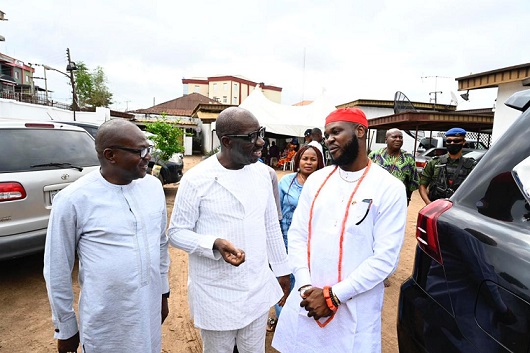 The Edo State Governor, Mr. Godwin Obaseki has described the late Enogie of Obazua-Iko, His Royal Highness, Ovbioba Edun Agharese Akenzua, as a great asset to Edo nation as he serve as an encyclopedia on the Benin Royal family.

The governor who was accompanied on a condolence visit to the family of the late traditional ruler by his Chief of Staff, Hon. Osaigbovo Iyoha and other top government functionaries, said the late Enogie will be greatly missed as he stood for the truth.

He said, “I am part of the family because over the last 70 years, he went to school with my mother and they grew up together and we had that personal family relationship. He stood for me throughout the period of my first tenure and my re-election.

“He was a true professional, a consummate journalist who had his path right. This is the first time I will be here and he is not around to receive me and have intimate sessions with me. It’s painful. We thank God for his life, as he was strong and clear on issues.”

Obaseki noted that the late Edun Akenzua was a true father, a great Edo man and a great prince of Benin Kingdom, and would be greatly missed, adding that  the state government will continue to support the family and work with them to ensure a successful burial.

No comments to show.